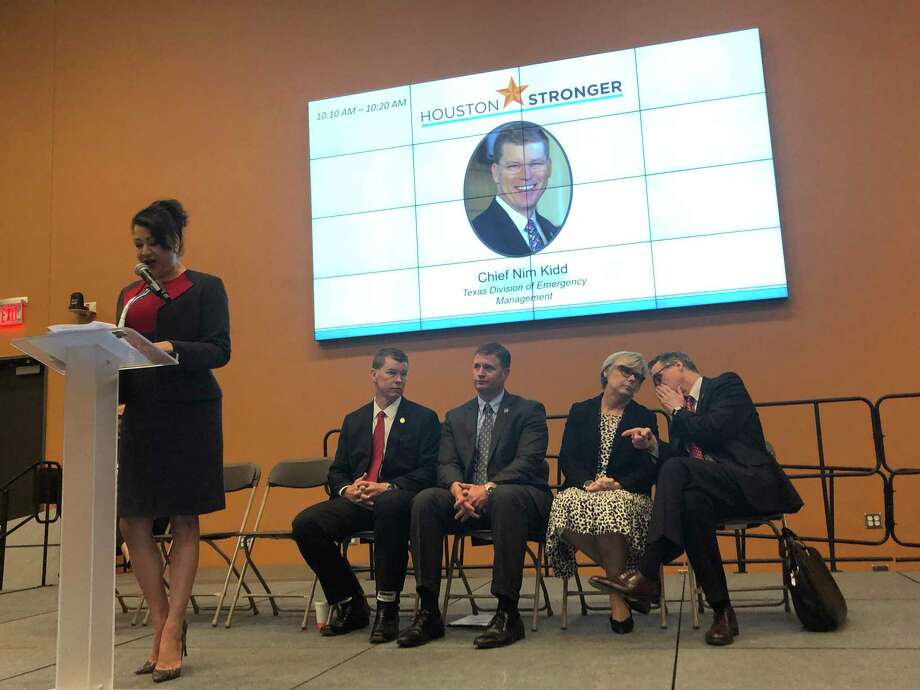 “Hurricane Harvey cost the Houston region 83 lives and over $120 billion in economic damages. Tropical Storm Imelda reminded us of the ever-present threat of flooding that needs solutions,” said Laura Murillo, Ph.D., president and CEO of the Houston Hispanic Chamber of Commerce. “Houston Stronger is a group of civic organizations, nonprofits and experts who hope to avoid similar losses in the future.”

The forum on Wednesday, Oct. 2, at the Houston Community College West Houston Institute seemed to center around the need for regional cooperation, across all levels of government.

“It’s been said before that water does not stop at political boundaries, and we need to stop acting like it does,” said State Rep. Dade Phelan, who represents Jefferson and Orange Counties. He encouraged citizens to get out and vote for Texas Proposition 8, which calls for a constitutional amendment that would start a flood infrastructure fund for drainage, flood mitigation and flood control projects.

Nim Kidd, chief of the Texas Division of Emergency Management, said disaster declarations are based not on politics but math. The threshold for public assistance (funds that go from the Federal Emergency Management Agency through the TDEM into local governments and nonprofits that help those affected by the disaster) just changed on Oct. 1, Kidd said.

“On the public assistance side, the federal government just changed yesterday the per capita indicator. It’s $1.53 per person times the last census. So you take the Texas census in 2010. We’re about 25 million people. You multiply that times $1.53,” Kidd said. “Now, I have to be able to demonstrate to the federal government $38.4 million of uninsured — uninsured is the keyword here — uninsured public loss or expense before the governor is authorized to ask the president for a major disaster declaration.”

Kidd emphasized that each event stands by itself and cannot be combined in losses from previous events and also that assistance decisions depend on whether there had been proper maintenance prior to the disaster.

Texas Water Development Board Member Kathleen Jackson said in the past, actions would be taken post-flood to mitigate that situation, but today’s steps must be proactive, based on population growth and other forecasted changes. She said Lidar flood maps that bring together 3D elevation data with hydraulic and weather information more resemble a picture than a flat map and offer the ability to see situations more clearly and how a certain improvement project would likely affect an area.

Sheri Willey, deputy branch chief for project management at the U.S. Army Corps of Engineers Galveston District, shared about some of the projects the USACE is working on, including one to improve dam safety at the Addicks and Barker reservoirs. The work to address seepage issues was actually started before Harvey and should be completed in May 2020, Willey said.

Some efforts coming that Steve Costello, chief recovery officer for the city of Houston, mentioned include building 60 apartment complexes across the city to house people impacted, turning Inwood Forest Golf Course into a detention area along White Oak Bayou and building a conversion channel where White Oak and Buffalo Bayous meet.

Area resident Sylvester Reeder asked the speakers which of them thought flooding could be prevented. When none of them raised their hands, Reeder said that was part of the issue. Costello objected, voicing his support for cooperative efforts to minimize losses, even when big storms cannot be thwarted.

“We cannot predict a Harvey. We cannot predict the flood that we had last week. And not only that, these floods are never region-wide,” Costello said. “They can be site-specific. What we’re trying to do is solve the problems in the past and anticipate the future and mitigate the flooding because we are not Mother Nature.”

As published by the Houston Chronicle https://www.chron.com/neighborhood/bellaire/news/article/Houston-Stronger-forum-talks-regional-flood-14490091.php

Ending DACA would cost about $6 billion a year

Hurricane Harvey cost the Houston region 83 lives and over $120 billion in economic damages.

Another challenge to Houston’s economy