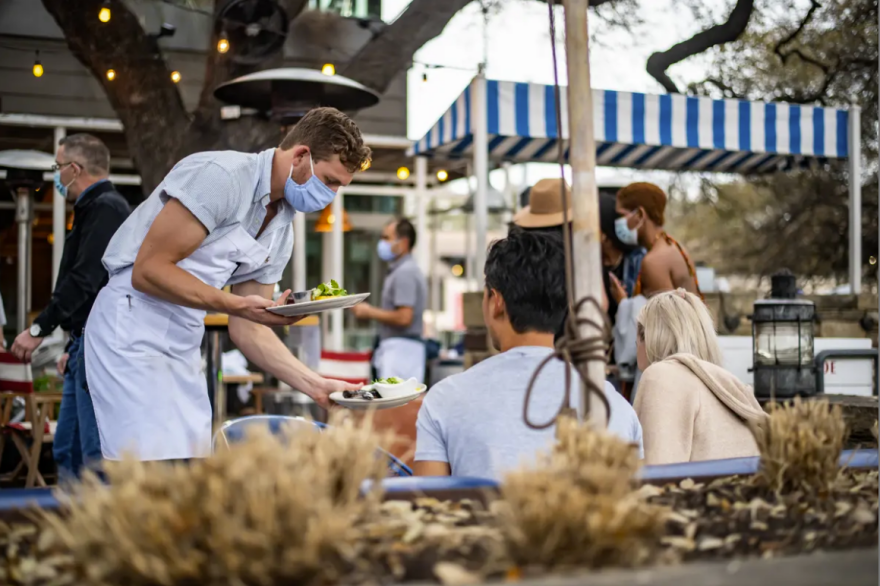 Sergio Flores for The Texas Tribune

Job growth in the state, driven by population gains, has outpaced the rest of the country in recent months, according to recent federal data.

The Texas labor market appears to have rebounded from the pandemic, with rapid population growth driving a demand for jobs.

The state ended 2021 with about 13.06 million nonagricultural jobs — about 89,600 more jobs than in February 2020, before the onset of the pandemic, according to the Texas Workforce Commission.

Unemployment levels have also been on a steady decline in the state and dropped to 5% in December. Data from the Federal Reserve Bank of Dallas shows that the state’s unemployment rate was at 3.7% in February 2020 before it skyrocketed when pandemic restrictions began. The rate climbed to a record high of 12.9% when Gov. Greg Abbott ordered shutdowns in April 2020 to curb the spread of COVID-19.

The economic rebound from the pandemic recession in Texas is now outpacing the rest of the country, which experts attribute to population growth as well as the diversification of the economy and the loosening of COVID-19 restrictions.

Arizona, Idaho and Utah have also seen their workforces bounce back to pre-pandemic levels, according to data from the U.S. Bureau of Labor Statistics, and experts say other states should follow soon. Not counting farm work, payroll employment increased in 16 other states as well but remained stagnant in 33 states and Washington, D.C.

Texas is the fastest-growing state in the country, and a growing population leads to a growing demand for employment, said Daniel Hamermesh, labor economist and former economics professor at the University of Texas at Austin.

Because of the pandemic, “we’ve seen a one-time drop in employment everywhere, which is only now coming back,” said Hamermesh, a research associate at the National Bureau of Economic Research and the Institute for the Study of Labor. “The fact it’s coming back in Texas faster is because of the population growth. There’s more people being here wanting to work.”

According to 2020 census data, Texas gained the most residents of any state since 2010. People of color accounted for 95% of the population growth, with Texas gaining nearly 11 Hispanic residents for every additional white resident since 2010.

The relatively fast recovery of the job market can also be attributed to the diversification of the Texas economy, Hamermesh added. Texas does not rely heavily on any single industry, unlike states like Nevada or New York, which are still recovering from the hits the tourism and entertainment industries have taken during the pandemic.

Adding to that diversity has been the recent growth of the technology sector in the state. A number of technology companies have relocated to Texas from coastal cities, including electric automaker Tesla, which relocated its headquarters to Austin from Palo Alto, California, at the end of 2021. Others, such as Samsung, are massively expanding their Texas footprint.

The employment rate also has rebounded as Texas residents have gotten vaccinated and the state has loosened pandemic restrictions.

Steven Craig, an economics professor at the University of Houston, said a more relaxed regulatory body can allow the economy to recover at a faster pace.

“If Texas is restructuring faster than the country that was suggested, we’re a little bit more flexible because we have less government restrictions,” Craig said.

Texas was one of the first states to loosen pandemic restrictions, reopening businesses at limited capacity during the first surge as early as May 2020. And as Abbott has touted the need to prioritize economic recovery throughout the pandemic, he has been repeatedly met with swift criticism from Democrats and local officials who have expressed concern that easing business restrictions contributes to the spread of the virus.

As unemployment rates have fallen, some businesses — particularly those in the service industry — have been struggling to hire and retain employees, said Laura Murillo, the president of the Houston Hispanic Chamber of Commerce.

Murillo said Texans are choosing work environments that offer more pay and more flexibility, whether those involve remote and part-time employment or starting their own businesses.

She said businesses have been successful when they adapt operations to meet the needs of their employees and the circumstances of COVID-19.

“The ones that are successful and that are continuing to thrive have accepted that we’re not going back to the old way of doing business,” Murillo said.

As published by the Texas Public Radio https://www.tpr.org/business/2022-01-28/texas-now-has-more-jobs-than-it-did-before-the-pandemic-hit